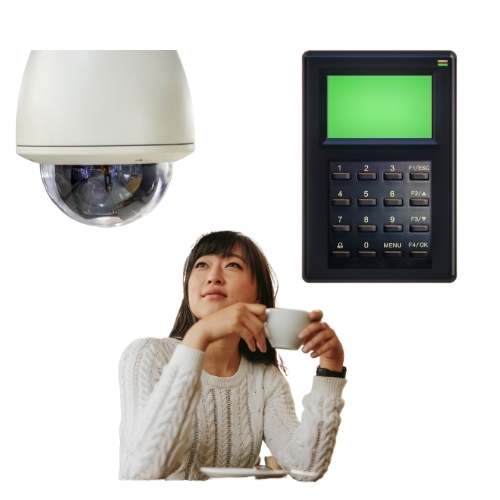 This is a question a lot of people want the answer to. I have personally installed thousands of both types of system since 1981 so I have some definite opinions.

They are really completely different systems that serve different purposes. However, if you were going to choose between an alarm and a CCTV system to protect your home, an alarm system is definitely better.

A more useful question I think is “If you had to choose between having an alarm system or a CCTV system which would you choose?”

A camera system is not likely to prevent a crime from being committed. It will show you what has happened after the event and perhaps provide the police with some information to make an arrest. If the crime was serious and there was a threat to life, CCTV footage can be collected from the scene and other cameras in the vicinity.

But let’s face it, the police aren’t going to put alot of time into analysing your CCTV footage if a thief broke in to your home and stole your laptop and some jewellry. They don’t have the resources.

Cameras can be used as an extremely effective prevention tool though if they’re installed correctly. (Hardly anyone doesI’ll explain more as we go.)

An alarm system may not prevent a break-in either. However if it’s installed properly, it will almost certainly restrict the amount of time the intruder stays in your home or other premises.

That’s because knowledgeable installers know the value of creating as much loud, harsh and unpleasant sound inside your home when the alarm is triggered.

These internal sirens aren’t there to ‘scare the burglar off’ although when installed correctly they probably will.

Their main purpose is to severely restrict the intruder’s most important asset he uses during a robbery – his hearing!

With properly located sirens, the burglar can’t hear a car pulling up in the driveway, or a key turning in the lock, or someone walking up the stairs – all warning sounds that tell him he’s in danger of being caught in the act!

The ‘someone’ could be you, a neighbor or the police. It doesn’t matter. He does not want to risk getting caught or having to fight his way past you to make his escape.

So when the 110 decibel sirens are triggered, he is most likely inclined to turn and run. He might grab the laptop that’s on the kitchen table or the shopping money on the counter on his way out but he certainly will not spend time going from room to room looking for treasure.

CCTV is Useless Once The Intruder Is Inside Your Home

Contrast that with what happens when your only defense is CCTV cameras. There is no deafening sound filling the house and no-one is notified that a crime is taking place. The intruder can pull down the blinds and go about his work in sweet silence. He is free to go from room to room picking through your treasure while he listens for the sounds of danger approaching.

He will have already prepared an escape path by opening a back door or window where he can flee if he hears someone coming through the front door.

Adding a low cost IP camera connected to your smartphone provides a low-cost video verification system. You can log in and see why the alarm was triggered. Wyze is a good choice. I don’t get paid for recommending them. I just like their stuff.

The Problems With Cameras Used for Home Protection

Cameras Outside, Intruders Inside. If the cameras are installed on the outside of your home, you’ll have wonderfully crisp and clear pictures of the front yard, driveway, backyard and the side of the house. This is great for general surveillance of the area surrounding your home, but useless in the event of an actual intrusion. Even if you have motion detection or other analytics enabled on your cameras, once the intruder is inside stealing your stuff nothing will be recorded on your expensive camera system.

So for cameras to be effective as a prevention tool, they need to be inside as well as outside.

Cameras Inside Your Home: Most people are uncomfortable having cameras installed inside. But given that’s where they’ll be most effective at preventing a crime, it’s something to consider.

But there’s another problem

If you want to view your cameras remotely from your smartphone, they need to be connected to the internet. But if you can access your images via the internet, so can hackers. And they don’t even need to be that clever,

Hackers: You probably won’t be targeted by foreign spy agencies but there are plenty of free tools available such as Shodan that hackers use to find internet connected CCTV systems just like yours.

It’s one of many tools that hobbiest hackers can use to automatically search for any device that’s connected to the internet. It does all the work for the hacker.

Listen to this expert explain what he can do with Shodan.

So they can hack ships now!

No Power, No Cameras

If you do choose a camera system, make sure you get a UPS as well – that’s an Uninterruptible Power Supply. It’s like a battery back-up for mains powered appliances. If you don’t have one of these connected to your camera system, a burglar can easily turn the power off at your switchboard and completely power down your cameras. And without power, your system is useless. You also need to consider having the Network Video Recorder secured in a locked, ventilated enclosure that’s difficult to locate.

If the intruder can find it, he can quickly disconnect the cables and take it with him – along with the incriminating footage.

If your heart is set on having a new CCTV system over an old fashioned alarm system, here’s what I would suggest.

Connect it to your internet router and make sure you choose a complicated password. Download the free app.

Hikvision have a new camera called Accusense that can trigger an alert on your smartphone if it sees a person in its field of view. It can also be set to trigger if detects vehicles or both people and vehicles. Hikvision is the only manufacturer to have this technology at the moment. That’s the only reason I recommend them.

Install this camera at the front of the house where it will see someone approaching the front door. In my experience, a burglar will knock on the front door to determine if anyone is home before trying to break in. I’ve been testing this camera at my home for 4 months and it’s pretty impressive. It has never triggered due to birds, cats shadows or swaying trees. It has occasionally failed to detect a human but remember its a $250.00 camera not a $5,000.00 camera so it will have limitations.

You’ll receive a notification and high definition video clip of the visitor on your phone. The camera has a built-in speaker that will play one of six pre-defined messages and flash a white strobe light. This is so unique and unexpected that the intruder will possible take off at this point.

2 – Install another two or three ‘standard’ Hikvision IP cameras in your home.

Good locations would be the main hallway, the living room and the garage.

These can be set to standard ‘motion detection’ to give you an alert in case the intruder doesn’t trigger the front door camera.

3 – Disable Inside Cameras When You’re Home

Wire the inside cameras so they can be disabled via a switch when you’re home. This can be any type of toggle switch or a key-switch.

The best way though is to have it connected to your home alarm system if you have one. Use an output that changes state when you arm and disarm the alarm. That way the inside cameras will automatically be disabled when you come home and turn the alarm off. They will be reconnected when you arm the system and leave the house.

If you don’t know how to do this, let me know and I’ll provide a drawing. It’s easy and only needs a few parts. If you’re having your system installed by a professional, make it clear that this is how you want the system set up.

Alarm and CCTV All In One

Another effective solution is to consider the Risco Agility 4 system.

It’s a wireless alarm system with a snap-shot camera built into the infra-red motion sensors. Whatever the motion sensor detects is captured by the colour camera and sent to your smartphone with an alert message. The free app is one of the best I’ve seen.

The Agility 4 can also have high definition IP cameras connected. It works like a traditional CCTV system – you can log on to any camera and get a live view. It’s also possible to link an IP camera to a motion senor to receive a HD video clip of alarm activity. for event-driven video clips

Both CCTV and intruder alarm systems play a role in helping to keep you and your family safe. The alarm provides an instant message to the intruder that he’s been detected and help is probably coming.

A camera system provides evidence for police to assist in the apprhension of an offender, if the crime is serious enough. Newer camersa can also provide an effective perimeter detection system as well.

Of course, you’ll decide what’s best for you based on your own situation. But if this was a horse race and I was a betting man, I’d put my money on the intruder alarm system every time.

In any case, I hope you learned something!

Continue Reading
link to Can I Convert My Alarm To Self Monitoring?

Looking to join the growing number of homeowners and businesses that want to monitor their own alarm systems? The good news is that if your alarm is already monitored by a professional monitoring...

Alarmatics.com was created by me to help you, the security system end user get more from your security devices. With over 30 years of hands-on experience n designing, installing and maintaining electronic security systems my goal is to provide you with honest advice on the basics of security systems, CCTV cameras, self monitoring with apps and lots more. I’m also a tinkerer and love to modify security equipment and make it do useful stuff it wasn’t really designed to do! Dive in and enjoy!

This site is a participant in the Amazon Services LLC Associates Program, an affiliate advertising program designed to provide a means for sites to earn advertising fees by advertising and linking to Amazon.com. We are compensated for referring traffic and business to Amazon and other companies linked to on this site.